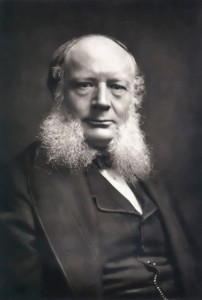 On 12 October 1847, Siemens & Halske Telegraphen-Bau-Anstalt was founded by the engineer and artillery officer Werner von Siemens and the mechanic Johann Georg Halske as the first company to manufacture exclusively electrical products. While the population in the beginning was very sceptical about the new technology, the Prussian state commissioned the company as early as 1848 to establish a secure communications link between Berlin and Frankfurt/Main. The motive for this project: King and government should be able to follow the decisions of the German National Assembly in Frankfurt’s Paulskirche with as little delay as possible.

From 1850 Siemens expanded its business activities, particularly to Russia and England, where Werner Siemens’ brothers Carl and Wilhelm managed the company. By 1866, when Werner Siemens discovered the dynamoelectric principle, there were no longer any limits to general electrification. Within a few decades, his company developed from a small precision engineering workshop producing mechanical bells for railways, wire insulation and, above all, electrical telegraphs, into one of the world’s largest companies in the field of low and high voltage current technology. 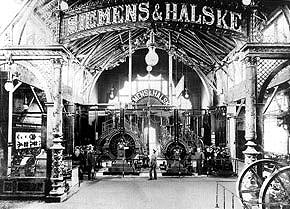 In 1890 Werner von Siemens withdrew and left the business to his brother Carl and his sons Arnold and Wilhelm. They converted the company into a stock corporation in 1897. In 1903 the AG (Aktiengesellschaft = stock corporation) took over the Elektrizitäts-AG (AG = Aktiengesellschaft = stock corporation), formerly Schuckert & Co. Together with the heavy-current engineering division of Siemens & Halske, it was outsourced to Siemens-Schuckert-Werke GmbH. Ongoing patent disputes with the competing company AEG were ended by the foundation of a joint company for wireless telegraphy system Telefunken.

Together with two other companies, Siemens & Halske formed the Osram Light Bulb Company in 1919. From 1919 Carl Friedrich von Siemens took over the management of the company. During the First World War, the electrical industry lost its world market position. Re-claiming this position and raising capital were the main tasks of the company during the 1920s. In the following years, the triumphal success of radio began with the production of radios and television sets. Electrical household products gradually gained acceptance. During the Third Reich, however, forced organisation and state control increasingly restricted the company’s decision-making scope. Nevertheless, measured by the size of its workforce, Siemens was the world’s largest electrical company at the outbreak of the Second World War.

1 This chapter is mainly based on information from the webpage of Siemens (see bibliography).