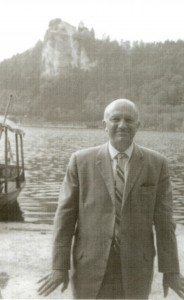 Franz Karl Konrad Ronneberger was born on 15 March 1913 in the small Thuringian town of Auma. He came from a rather modest family background, which he later characterized as a “petty bourgeois milieu” (Ronneberger 1989, p. 21ff.). His father was a craftsman, his mother a housewife. When his father died in 1915 during the First World War, his mother took over his father’s handicraft business. From then on, the education of Franz and his sister Hedwig, born in 1914, was in the hands of an unmarried aunt (Tante Olga) on his father’s side. After the war his mother remarried but continued to live in Auma.1

In the spring of 1938 Franz Ronneberger got engaged to the biologist and linguist Ellen Staschen2, whom he married in September of the same year. Shortly after his move to Vienna in March 1939 his son Dirk was born. In 1941 the daughter Antke-Margret was born.

Franz Ronneberger died on 30 March 1999 at the age of 86 in his family’s house in Nuremberg.

After attending the Auma primary school (1919-1923) Franz Ronneberger moved to the grammar school in Weimar (1923-25). From there he went a higher school (Gymnasium) in Pößneck, where he graduated from high school in 1932 (Abitur) with the title “very good”. This achievement qualified Ronneberger for a scholarship from the German National Academic Foundation. Throughout his school years, Ronneberger was the best in his class, began to take an interest in politics at an early age, and in retrospect already in his early years considered himself politically “right” (Ronneberger 1989, p. 30).

From 1932 Ronneberger studied law at the University of Kiel. After the fourth semester, he moved to the Ludwig Maximilian University in Munich, where he studied law and political science. In 1935 he passed the first state examination in law. Ronneberger received his doctorate in Munich in 1938 with his dissertation “Southeastern Europe in Bismarck’s political picture of order”.3

In 1944 he obtained his habilitation degree at the Vienna Graduate School of Global Trade (Hochschule für Welthandel), where he received the Venia legendi for political science (Staatswissenschaften),4 especially for the political problems in Southeast Europe. He taught as a lecturer in political science at the university there until the liquidator for the institutions of the German Reich of the Republic of Austria removed him from office based on the law of 22 August 1945.

4 The term “Staatswissenschaften” is an old, but still existing word for a disciplin which contains economics, law and politics as parts.