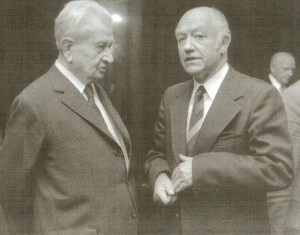 Inspired in principle by

Carl Hundhausen in 1975, Ronneberger increasingly turned to the comprehensive scientific substantiation of public relations. Ronneberger’s 1977 essay “Legitimisation through Information” (Legitimation durch Information) is important for the development of a modern understanding of PR, in which he developed a societal oriented approach based on political science and democracy theory. Ronneberger took up his leitmotif “Integration of Society” (cf. Kunczik 1997, p. 18) and proceeded from a consistently pluralistic concept of society. For him, PR is the public representation of partial interests that are oriented towards the common good and minimal social consensus, and thus a constitutive factor of a democratic political system (Kunczik 2010, pp. 273ff.)1.

This early social-theoretical positioning of public relations as a “constitutive factor of democracy” within a pluralistically organized, parliamentary and democratic political system can be regarded today as an important theoretical achievement and as an important theoretical contribution by Ronneberger to a PR theory. It was probably also the earliest PR-theoretical contribution from an international point of view to ask about the societal functions of public relations and to describe the “mechanism” by which public relations becomes effective for the public and in society. Some basic ideas of this approach are well expressed in the following, longer quotation:

If, therefore, PR activities are intentionally directed towards the assertion of one’s own interests and these strive for the greatest possible resonance, this means functionally for the democratic system that the ways of thinking, social and cultural norms of a society are constantly examined in its sub-public spheres, confirmed or changed by examination, at any rate constantly brought to mind. This is all done in the interests of the individual. But to the extent that understanding is solicited, the relations of the public affect the interests by way of feedback and feedback and influence the objectives. This also belongs to the functional contribution of PR under the conditions of pluralism. Even if the PR driver does not at all think about the consequences of his actions, which should be the rule, he is subject to the laws of the public process. He must express himself in such a way that he is understood by as many people as possible and that his statements can be endorsed. He must orientate himself on existing opinions, structures, attitudes, roles and, above all, social and cultural norms. And this is how that cycle, that self-correction of interest, on which a pluralistic system is dependent, does not want to degenerate, arises (…).

First, Franz Ronneberger was decisively involved in the institutionalization of PR-theoretical and PR-related reflection in Germany. In addition to communication scientists (such as Manfred Rühl) and scientists from various other disciplines, several scientifically interested PR practitioners such as Albert Oeckl, Günther Petersen and Heinz Flieger took part in the “Rummelsberger Talks”. Thus the “Rummelsberger Gespräche”, the results of which were mostly published by the “Verlag für deutsche Wirtschaftsbiographien Heinz Flieger”, can be regarded as the first cooperative efforts in Germany to approach PR topics systematically and scientifically and not only practice-oriented (how-to-do literature).

The Rummelsberg seminars were thus active in PR research ten years earlier than the specialist group PR and Organizational Communication, which was established in 1992 on the DGPuK (German Communication Association) annual conference in Bamberg. They have produced some research results and can claim their place in the German “history of reflection” (Manfred Rühl) on PR research. Topics included public relations of the political system, public administration, public relations of associations and PR of non-profit organizations.2

Systems theoretical and socio-historical PR approach (together with Rühl)

Even after his retirement in 1980, Franz Ronneberger remained active at the chair.3 In 1992 Franz Ronneberger, together with his colleague and son-in-law Manfred Rühl, published a “Theory of Public Relations”, albeit with the somewhat relativising subtitle “A Draft”. It also contains a socio-historical justification of PR in the development of modern industrial society (cf. Kunczik 2010, p. 273f.). Even more important in theory, however, is the system-theoretical-equivalence-functionalist view (cf. Kunczik 2010, pp. 273-280). For a brief and concise explanation and classification of the demanding draft theory of PR, reference is made to an essay by Otfried Jarren and Ulrike Röttger in the Public Relations Handbook. Here is only a deliberately brief presentation:

Ronneberger and Rühl describe […] (PR) as a subsystem of the social functional system of public communication (Publizistik): PR is a self-generating, self-organizing, self-preserving and self-referential system in the sense of autopoiesis. The authors identify three relevant structural dimensions (macro-, meso- and micro-level – i.e.), each implying specific inter-system relations between public relations and other social systems. […] PR represents a possibility to establish public communication (Publizistik). Their aim is to enable follow-up communication and action through thematization.

At the macro level, PR is described as an independent social functional system whose social function lies in the production and provision of assertive topics for public communication.

At the meso level, the PR subsystem – under market conditions of competing interests – delivers values and objectives as specific services for other societal functional systems: PR creates assertive themes to promote social trust for organisations and their public performance. In return, PR primarily receives social and psychological resources, such as attention, interest and time. At the micro level, Ronneberger/Rühl finally describe PR as an analysis and action system: PR as a suborganisation in organisations has the task of determining the need for PR action and proposing appropriate solutions. The aim of PR communication offers to trigger subsequent communication on a topic or to bring about specific changes in attitudes and behaviour among the target audiences.

Of course, this concept has also received various criticisms, for example because of the conception of PR as a functional subsystem of society or as a function of the common good. As far as these are concerned, it is certainly the case at the micro level and at the meso level that PR cannot automatically be oriented towards the common good because of its dependence on interests. But at the macro level, the point of view is different: At the macro level, any PR benefits society and not just individual areas. It cannot be denied that this theory provides a somewhat consistent approach based on systems theory of a Luhmanian type, which is based and reconstructed on public relations in society and not only in organisation theory.

Franz Ronneberger, as a communication scientist, not only represented the discipline very broadly, although of course he also developed research and publication focuses such as socialization research, communication policy (the term probably comes from Ronneberger) or public relations. In this, but also, for example, in the field of communication space research and the general relationship between politics and communication, he provided important impulses.

He was a highly esteemed colleague of the post-war generation, founding member of the Deutsche Gesellschaft für Publizistik und Kommunikationswissenschaft (German Communication Association) and – starting from his Nuremberg chair – founded a school of thought with doctoral students in science and practice. This was evident at annual meetings of his students, among other things, when Ronneberger was already celebrating his 80th birthday. On this birthday, Hartmut Großhans, Thomas Gruber, Ingrid Hamm, Ragnwolf H. Knorr, Manfred Scholz, Ulla Meister, Udo Rödel, Manfred Rühl, Wolfgang Friedrich, Jürgen Walchshöfer and Heinz-Werner Stuiber, among others, congratulated Franz Ronneberger in a witty brochure (see illustration).

Wolfgang Bergsdorf (1993) characterized Ronneberger in a contribution to his 80th birthday in the Rhenish Mercury as follows.

He is a person who never stages himself, but wins every communication partner through his knowledge, sincerity and serenity. As a committed Protestant, Ronneberger lives up to an optimism that has nothing to do with the pessimism of culture and civilization that is so common today.

1 Kunczik already dedicated nine pages to Ronneberger’s approach from the 1970s in the first edition of his 1993 theory overview book on PR.