Return to the Scientific World

Return to the Scientific World

In order to obtain an academic teaching license (Lehrbefugnis), Ronneberger wanted to habilitate a second time in 1960. The Republic of Austria had, in the context of denazification, deprived him of the teaching qualification he had acquired at the Viennese Graduate School of Global Trade. The renewed habilitation procedure took place at the Faculty of Law and Political Science of the University of Münster, where his two publications “Verwaltung im Ruhrgebiet als Integrationsproblem” (Administration in the Ruhr Area as an Integration Problem) and “Staatsverfassungstendenzen der Südoststaaten seit 1945” (Constitutional Tendencies of the Southeastern States since 1945) were accepted as habilitation theses. 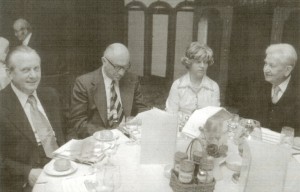 In 1964 Ronneberger’s post-war academic career made great strides: “Franz Ronneberger, a lawyer and sociologist with journalistic and political experience”, received the tenured professorship for Communication Research and Political Science (“Ordinariat für Publizistik und politische Wissenschaft”) at the Faculty of Economics and Social Sciences of the University of Erlangen-Nuremberg. He earned a scientific profile “not only in the field of communication policy, but also in the fields of socialisation through mass communication and communication in organisations” (Pürer 2003, p. 45). Between 1978 and 1986 he published his three-volume “Communication Policy”, certainly his major scientific work.1 He started from the comprehensive understanding that all efforts to communicate or prevent communication can assume a political character (Tonnemacher/Burkhard in Hachmeister 2008, p. 215). In this context Ronneberger inevitably expressed himself not only about the mass media, but also about the growing importance of (state) public relations work (cf. Kunczik 1993, p. 132).