Franz Ronneberger was drafted into service at the beginning of the Second World War. In 1939 he moved to Vienna with his family as part of this service obligation.1 The only 26-year-old was entrusted by the Reich Governor in Vienna, Arthur Seyß-Inquart, with setting up a press information office for the Foreign Office. At the same time, he took over a teaching position (lecturer) for “Society and Politics in Southeast Europe” at the Graduate School of Global Trade in Vienna.

Ronneberger’s activity in Southeast Europe for military defence – which he later himself called “espionage” (oral statement to G.BE., about 1993/94) – was facilitated by his teaching activities at the Graduate School of Global Trade Trade and his interest and scientific engagement with Southeast Europe. Thus, Ronneberger also succeeded in completing his (first) habilitation theses on political aspects of Southeastern Europe. He finished his habilitation procedure during the war in 1944.

As early as 1943, the Press Information Office of the Federal Foreign Office was merged with the Publication Office Vienna. This institution was directly under the control of the Reich Security Main Office (RSMO) in Berlin under Heinrich Himmler. The RSMO was founded at the beginning of the Second World War by Reichsführer SS Heinrich Himmler by merging Security Police (Sipo) and Security Service (SD). The office represented the central authority that headed all police and security organs in Germany at the time of National Socialism. 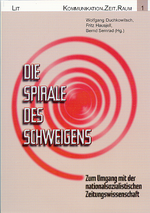 At the height of his Nazi career, Ronneberger was – as Heinelt lists – “SS-Untersturmführer” (second lieutenant of the SS) – thus holding the lowest rank of officer in the SS – “and a full-time employee of the Vienna SD, Gau Headquarter Leader in the border office NSDAP-Gau Lower Danube and leader of the outpost Reich Student Governance South East. He headed the Vienna correspondent office of the Federal Foreign Office (Dr. Ronneberger) and the intelligence service of the South East Europe Society (SOEG). He was a lecturer at the University for World Trade in Vienna, research assistant at the Union of National Associations of Journalists (UNJ), the Völkischer Beobachter and other Nazi media. On his behalf, he headed the Vienna Publication Office of the Southeast German Research Foundation (SODFG), which was subordinated to the Reich Security Main Office (RSHA).” (Heinelt 2002, p. 93. Emphasis not in orig.)

In terms of craftsmanship, he gained experience above all in sociological field research (Ronneberger 1989, p. 59), later in press observation and documentation, information collection and processing, the establishment and maintenance of contacts and the writing of analytical and persuasive press texts – adapted to the conditions of the Nazi state and its communication system (Heinelt 2003, p. 133, 140, 159).

Ronneberger’s Relationship to National Socialism I

In his unpublished autobiography, Ronneberger (1989) has commented in detail on how he found his way into the National Socialist political system at a young age and how he could make a career in it. He remembered having already made his first political experiences as a pupil in Weimar in 1924: he became an “errand boy” for  a teacher who had lost a hand in the First World War, probably also due to good achievements at school, fetching the teacher’s notebooks from home and returning them. Although the teacher had not indoctrinated him party-politically, “there was generally a national and militant tone” (Ronneberger 1989, p. 43). A black, white and red ribbon (a symbol of national sentiment) he had obtained and which was wrapped around the school colours on his school cap, was immediately noticed in Pößneck and led to a violent conflict when older pupils took it. Ronneberger summed up his early political convictions as follows:

If I interpret my political convictions of the time correctly, they can best be described as detached curiosity. I cannot say I believed in the correctness of Ludendorff’s theses, but I did not discount their confirmation either.

The year 1933, which Ronneberger experienced as a deep incision, saw him summoned before an NS student leader, who spoke to him as a university benefactor about his affiliation to the elite and asked him whether he  was already one of them, i.e. whether he was already a member of the National Socialist party. Ronneberger joined the SA in 1933: “My student friends advised me to join the SA and to register as a candidate for the Student Union” (cf. Ronneberger 1989, p. 43).

He reflected on the “Röhm Putsch” of 1934, which was in fact the cold-blooded murder of the SA leadership and other persons, as the disempowerment of the SA and the simultaneous increase in power of the SS under Himmler. Ronneberger did not experience the burning of books in 1933 through his own eyes, but only through media coverage. He felt “uncomfortable” about it (Ronneberger 1989, p. 62), but comforted himself with the fact that such phenomena had occurred again and again during revolutions. He found the “night of broken glass” (Reichskristallnacht), the night, in which National Socialists destroyed and plundered Jewish businesses and institutions, “annoying”, so he later reconstructed his emotions of that time. But even then it was clear to him that the officially stated occasion, the murder of a German diplomat by a Jew in France, was a pure pretext. He reflected that even then he was “not an active anti-Semite”, although he was quite aware of certain “fears of contact” with Jews (Ronneberger 1989, p. 69).

His 1989 reconstructed attitude to parliamentarianism in the 1930s is reflected in the following quote:

We were convinced that parliamentarianism was at an end and believed we could show this in the malaise in neighbouring European countries. The ‘leader state’ therefore seemed to us to be a thoroughly modern alternative pointing into the future

Ronneberger told that he had participated only once in the Nuremberg Reich Party congresses, probably in 1937. He had to look after student delegations from abroad and was impressed by the spectacle of a “light dome”.

His inner attitude towards National Socialism was based on a “national attitude”, which Ronneberger also ascribed to many Germans in retrospect: “It is easy to say that in very broad strata of the bourgeoisie of any provenance it was simply part of the good tone to be national.” (Ronneberger 1989, p. 77 – emphasis in the original).

The idea of the “community of the people” (Volksgemeinschaft), i.e. “the overcoming of the division of the German people into many individuals, hostile and fighting groups, above all the division between the working class and the bourgeois society, capital” (cf. Ronneberger 1989, p. 81), he regarded retrospectively as the least outlandish idea. On the other hand, he could not make friends with the so-called leader principle: “But who determines the leaders, who recognizes the best, who uses them?” (Ronneberger 1989, p. 83). There were some doubts of Ronneberger about the National Socialist ideology and of course also about politics. Thus Ronneberger considered the invasion and smashing of Czechoslovakia in 1939 to be a “betrayal of the idea of the Volksgemeinschaft” (Ronneberger 1989, p. 82) and the “murder of millions of Jews [is] so incomprehensible that no one can really cope with it.” (Ronneberger 1989, vol. I, p. 92).

As far as the “question of guilt” is concerned, he reflected on collective and personal guilt and drew the following conclusion in retrospect:

At no time did I see myself as the culprit … No, in the search for a starting point for my personal guilt I did not find what I was looking for. What I did from 1933 to 1945 can be represented at any time in the sense of freedom of opinion. Only when you ask a person to be as smart in his youth as he was in old age would I perhaps be ashamed. But I think I would only have to do that if I hadn’t already begun to recognize the errors in the 1940s, i.e. between my 27th and 30th years of age. I have never slandered anyone, let alone denounced them, although there were more than enough opportunities. I did not harm anyone because of his attitude and I did not even reject him as an employee, although this would have been my duty. And I certainly didn’t indoctrinate anyone. I was surrounded by unlimited openness. Everyone who has worked under me in Munich and Vienna will gladly confirm this (and so it happened, as far as I had to claim it during the “denazification”).

Ronneberger pointed out that he did not have to relearn anything in the field of his Southeastern European research and scientific publications after 1945, only “in my journalistic work in the Westdeutsche Allgemeine I had to acquire a different style, which began to develop under the influence of Anglo-Saxon journalism in general in Germany (sharp separation of news and commentary, reduction to the essentials and the essentials)”. (Ronneberger 1989, vol. 1, p. 92).

1 Especially concerning the Viennese period see also: Weber, Markus: Schritte aus dem Schatten. (On the History of the Institute of Journalism and Communication Studies at the University of Vienna). In: http://dreip.wordpress.com/ipkw/ (Blog) (available on 3 April 2012)